French Guinea became the Republic of Guinea at independence in 1958. It is bounded by Liberia, Cote d Ivoire, Senegal, and Mali; and shares a coastline between Sierra Leone and Guinea-Bissau stretching to over 300 kilometres. Its total landmass, which lies north of the equator, is about 246,000 square kilometres.

Guinea Conakry major industries include: aluminium, iron-ore, bauxite, diamond, and petroleum processing complexes; along with crude oil exploration. Its leading export is bauxite, and its capital is Conakry.

Guinea contains: plateaux, coastal plains bordering the Atlantic Ocean and River Niger, highlands, lowlands, valleys, rivers, rich and dense tropical rain forests culminating at Mount Nimba, which rises up to over 1,750 metres at its peak. The Guinea Conakry climate is tropical, with an average temperature of about 800F or 270C 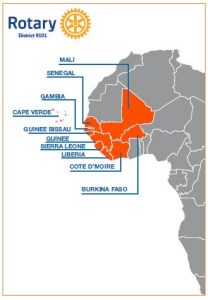